How to merge series to create one bigger table?

If you have several series created in your table, you can merge these into one table. The feature includes an option to merge all series having the same text in column headers. This creates one table instead of one table per series. The setting is available in Settings tab in tables for new sub series. 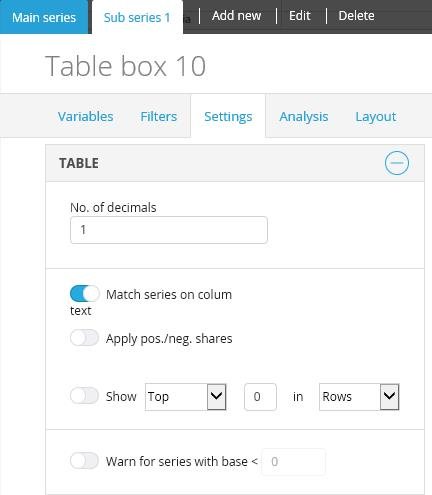 Example 2: The sub series has fewer rows than the main series. If a user creates a table in their dashboard and wants to show a mix of categorical and numerical questions, it is important to create each row as a series.

Below is an example of two series; one with % and another with average:

If column texts are matching it is required to ‘merge series on column text’ to be able to get one table and values in the column aligned. When ‘merge on column text’ is on for sub series 1, it looks like the following:

As you can see on the images above, layout is applied after merge and rows are colored correctly.