How to create recoding rules in general?

Recoding rules are the definition of the logic to do your recoding. 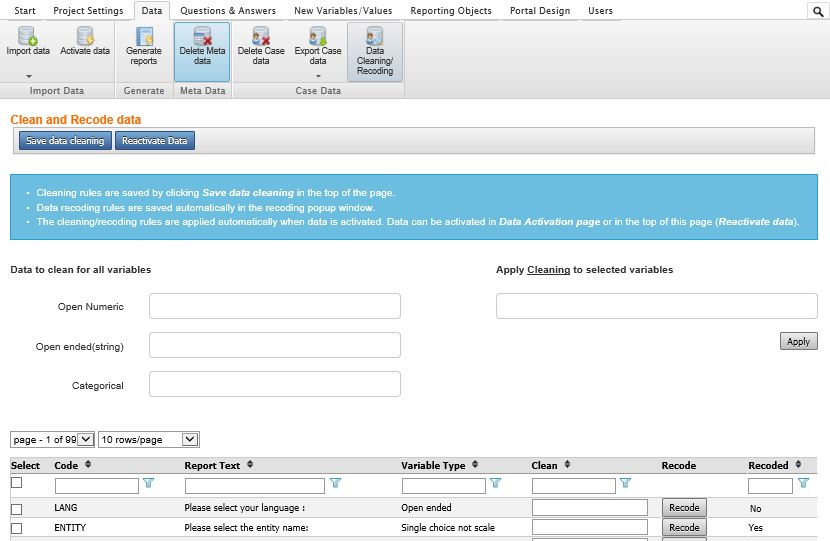 To create a recoding rule, click the Recode option for the desired variable. This will open the recoding window.

The recoding window looks slightly different depending on what type of variable is being recoded. In general, one or more values (Old values) are selected, and then the value is recoded (New value). You can also add a filter based on one variable to the recoding rule.

A variable can have unlimited recoding rules. If a variable has multiple rules that are overlapping each other, then only the latest one will be valid and applied to the data. The non-valid rules are marked in red, as shown in the example above. The image above shows a variable with four recoding rules. As the first and last rules are overlapping each other, the first one becomes invalid and will not be applied to the data.

Note: system missings can be recoded into something. A system missing has no value and is called 'Null' in the system, so then checkbox need to be ticked. The same is valid for recoding something into system missing. Note: data recoding rules will be applied every time the data gets activated. This can become problematic once you have a scheduled import and you use new and old values in the same rule. Example:

Use new values to recode it into, so these should be unique from the old value, see example below

Or you could do a permanent recode and remove the rule after data activation.